How to Maximize the Value of New Advances in Oncology 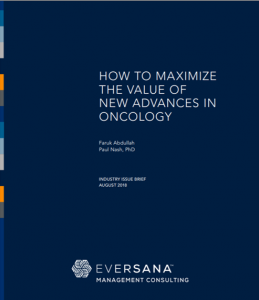 Cancer remains a global killer. Based on the most recent data recorded by the World Health Organization, globally there are about 14 million cancer cases and about 9 million cancer-related deaths per year.2 In the United States alone, more than 1.5 million new cancer cases were diagnosed and more than 600,000 cancer deaths were estimated to have occurred in 2017.

About 40% of people will develop cancer in their lifetime.3 Cancer incidence and deaths associated with cancer are expected to increase over the next decade, driven by such factors as the growing aging population and behavioral choices (e.g., smoking and obesity).

While the numbers are daunting, through clinical and commercial efforts, we are making progress to improve cancer patient outcomes. The introduction and commercialization of tyrosine kinase inhibitors (TKIs) is one great example of how the  industry is directly improving life expectancy of people with cancer by introducing new science into the market and ensuring patients get access to that science. Earlier detection, improved treatment regimens and guidelines, and increased access to care and patient support services have all played a role in chipping away at the cancer mortality rate and improvements in five-year survival. These trends show no sign of slowing, as new innovative therapies continue to prove themselves and become more widely adopted across the industry.